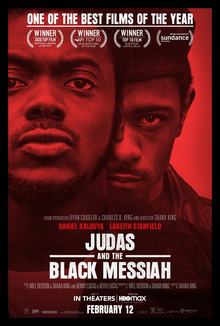 Judas and The Black Messiah is nominated for an Oscar. On the one hand, I’m tired of Black Oscar nominated films being about slavery and social justice struggles. On the other hand, it’s important to watch film on our history because it brings a new level of understanding when seeing history in motion rather than reading a book or hearing about it through the grapevine during Black History Month.

I couldn’t sit still the whole time watching the movie. The moment I got up to get a soda, I paced the living room for a moment, imaging myself in a racist scenario that’ll probably never happen and mouthing curse words.

Regardless if I’ll never have to join a revolutionary movement to fight for rights of Black people and POC. It’s problematic enough that it had to happen. And the fact that the law fought back with blood. The Black voice is so powerful that prison wasn’t enough. The FBI had to commit MURDER.

This makes me think twice about what I say online and not post whatever opinion that comes to mind. Feelings and opinions about social justice issues can change frequently, but people won’t forget or forgive what you post online.

Like most Black films on American history, I learned something I didn’t know. I didn’t know the severity of a Black informant that led to the murder of Fred Hampton. The school system is somewhat to blame for labeling the Black Panther Party as a radical movement that merely sought to kill white people, but I more so blame myself for the lack of education on the Revolutionary Movement.

It makes me think about how I have contributed to helping the white agenda directly or indirectly.

I’m in between not wanting to feel like a victim by blaming all the Black problems on racism and oppression, and not wanting to delve into a sellout by believing all the white ideologies. Well, all Black problems are not due to racism and oppression. And, all white opinions on social justice issues are not counterproductive to freedom. I do believe there are more white people today who want to see equality. I don’t trust them, but I will listen. I think it’s important to hear an opinion from someone on the outside looking in.

On the one hand, we have Candace Owens saying that the Democratic Party are the real racists and that they take the Black vote for granted with just enough help to make Black people feel like they’re progressing. On the other hand, if you’re a Black Conservative then you’re selling out to the white man’s Capitalism.

Even I have thought that maybe these Black Conservatives are on to something with their criticism on the Democratic Party. Black people have been voting Democrat since 1965, so what did I have to lose by switching parties anyway? But, I also feel like Donald Trump and the Republican Party have treated Candace Owens are an informant.

Her public statement about George Floyd not being a martyr and bringing up his criminal past was justification for white men to believe that there’s no problem with police brutality. Once again, all it took was one Black voice to speak for the white ideology.

Like in the movie when the Panthers visited the Crowns to collaborate their resources, this reminds me of Black Greek Organizations, how we have our differences and competitions but we also pull our resources together to help the community.

If Fred Hampton could see America today I doubt he would be impressed by much. He might applaud that social media is censoring all Conservative and far-right views. But merely allowing Liberal and far-left ideologies speak to the Black community can be detrimental as well.

1 comment on “My Thoughts on Judas and The Black Messiah.”