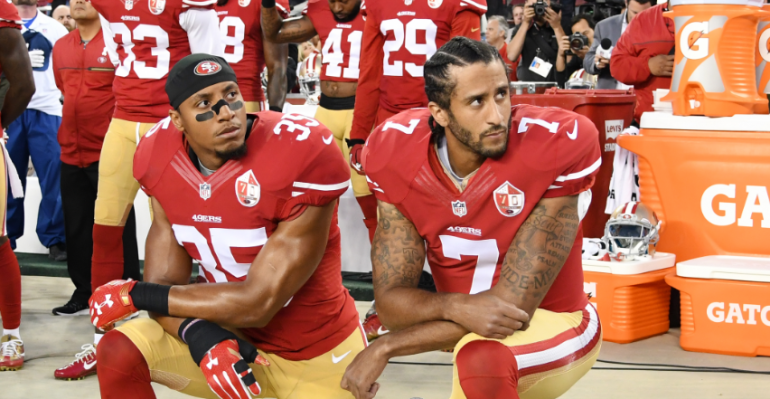 Colin Kaepernick had hope in signing on to the Baltimore Ravens until many fans reacted discouragingly to the possibility, which caused head coach, John Harbaugh, to publically state that the team will not add Kaepernick. We all know the story of Kaepernick when he kneeled during the National Anthem at the beginning of the 2016 NFL season. Ever since he has had tremendous support, and great ridicule, which ultimately cost his job in the NFL.

I wonder of Kaepernick ever thinks about how he could have combated police brutality other than bringing it to his workplace? Although its hard to imagine playing for the NFL as a “job,” it is a job nonetheless, and Kaepernick’s actions got him fired. Many other NFL players supported Kaepernick by kneeling during the Anthem, but no one else lost their job because of it. That is how white supremacy works. Nobody cares about the body of followers; they want to cut off the head, the leaders such as Martin Luther King Jr.
Kaepernick’s actions encouraged others to take their political views to the workplace. There were instances of people in the armed forces protesting the National Anthem, and refusing to Render Honor to the Flag, and received harsher punishments than what Kaepernick is dealing with.

I have no passion for sharing my political views at work because 1. It won’t make a huge impact as Kaepernick did and it will only get me in trouble. 2. No matter how many people support Kaepernick, no one has offered him a job, and if I get fired for showing my political views in the workplace, I rather know that someone will have my back for another job than to support my views. Kaepernick is lucky to be a millionaire and to have other monetary options through his fame. I’m nobody famous or rich, so being broke and jobless does me and the community no good.

Maybe someday I will have a journalist job where expressing my political views is encouraged, but until then it is best to keep my political views to a bare minimum on my job and social media. My wife, my mom, and my closest friends know where I stand on politics and social issues, and that is as far it will go.

0 comments on “Should We Keep Our Political Views and Workplace Separate?”