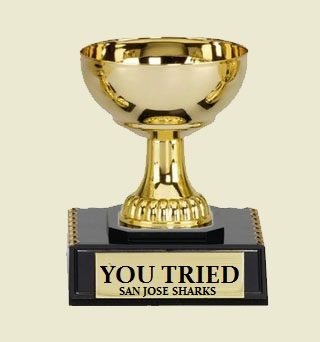 I played football for one season in middle school. I wasn’t a star player or even a good player. I just showed up to practice, and during game days I tried to stay hidden because I was scared to get in the game. I still got a participation trophy at the end of the season. It didn’t mean much to me. I took it home, set it on my desk, and allowed it to collect dust. I don’t know where the trophy is now. I got participation trophies for all the other sports I sucked at too. But that’s just my experience. Some kids don’t have exceptional talent, but their contribution was important to the teams’ success. Participation trophies don’t mean that everyone is equally a winner, it means that everyone’s participation meant something.

Participation trophies aren’t just for kids. A lot of adult life have participation trophies too. Some of my college professors gave credit for attendance and involvement. You could fail every assignment and still pass the class by just showing up and participating in the discussion. The good about participation grades is that some classes are just too hard and at the end of the semester at least your dedication in attendance and trying were not a waste of time. On the other hand, some professors could care less whether you show up to class because they feel like you are paying for the class, so it’s your money to waste by skipping.

Lebron James is the MVP of the Cleveland Cavaliers. Everyone can agree that his talent led the Cavaliers to their first NBA Championship in 52 years. It’s no argument that he deserves a ring. But, the bench players who never saw the court during the Finals got a ring too. Its arguable that some bench players don’t deserve rings since they did nothing but watch the Finals on the best seats in the arena. But, they’re on the team roster, so they contributed in some way.

Everyone on the team roster is there because the coaching staff saw talent that is contributable to the teams’ success even if their talent wasn’t needed for the Finals. So they deserve rings too.

So, it’s not just children who want to be recognized for their contributions because it is also relevant to adults to feel appreciated for their position. I understand the lesson that needs to be learned that the world doesn’t owe you anything no matter how hard you tried. Everyone will learn that at some point in their lives, but if you have the power to make everyone feel appreciated then why not?